1st item: Civil War era ALS. One page handwritten letter from James Alexander Seddon (1815-1880), 4th Confederate States Secretary of War from November 21, 1862 to February 5, 1865, War Department, presumably in Richmond, VA, addressed to General Braxton Bragg (1817-1876), no location, but likely also in Richmond or elsewhere in VA, dated April 9, 1864. The letter discusses intelligence that Seddon has received regarding the movements of Union Army Major General Benjamin Franklin Butler (1818-1893) during his command of the Army of the James, just prior to the commencement of Union Army Lieutenant General Ulysses S. Grant’s (1822-1885) Overland Campaign, a series of battles fought in Virginia during May and June 1864, reading “Genl I send herewith a communication submitted by the Signal Corps as to the plans of the enemy. Gen’l [Arnold Elzey Jones Jr. (1816-1871)] showed me yesterday a telegram from one of his officers in the Peninsula informing him of intelligence derived from Deserters, several of whom coming at different hours, that Butler was about to advance with some four thousand men towards Bottoms Bridge [New Kent County, Virginia]. If such movement is contemplated with so small a force, it is probably merely to prevent communication and mark the early landing and advance of a much larger force. These matters are submitted however with confidence to your better judgment. Very truly yrs James A Seddon Secty of War.” with postscript reading “P.S. I send also for your perusal a letter from a secret agent who has just gone to Maryland. JAS” lower left. Includes a typed transcription, does not include an envelope or the letter from the secret agent in Maryland alluded to in Seddon’s postscript. Letter: 8″ H x 5″ W.

2nd item: Civil War era ALS. One page handwritten letter from George Wythe Randolph (1818-1867), 3rd Confederate States Secretary of War from March 24 to November 15, 1862, Richmond, VA, addressed to His Excellency John Letcher (1813-1884), 34th Governor of Virginia from January 1, 1860, to January 1, 1864, no location, presumably also in Richmond, VA, dated July 31, 1862. The letter, written on Confederate States of America (CSA) Department of War stationery, reads “Sir: I have the honor to acknowledge receipt of your letter of the 28th inst and to inform you that it will receive the careful consideration of the Department. The principal obstacle to the infliction of punishment for treason, in the case cited by your Excellency, is the greater facility possessed by the enemy for retaliation. Very respectfully Your obdt. servt. Geo. W. Randolph Secretary of War.” Ink inscriptions, en verso. Includes a typed transcription, does not include an envelope. Letter: 10″ H x 7 1/2″ W.

3rd-4th items: Civil War era ALS. One double-sided page handwritten letter from LeRoy Pope Walker (1817-1884), 1st Confederate States Secretary of War from February 25, 1861 to September 16, 1861, Richmond, VA, to Isham G. Harris (1818-1897), 16th governor of Tennessee from 1857 to 1862, Nashville, TN, dated July 18, 1861. The letter, written on CSA War Department stationery, primarily references a letter written by Mr, Yerger of Corinth, MS, to Jefferson Davis, that suggests in concurrence with “… testimony of other writers, additional troops, in my opinion, should be sent forward without delay. If the guns at Chattanooga are not being manufactured for us, they ought to be secured at once; and a reconnaissance of the point described ought to be ordered. Very Respectfully your obt servant L. P. Walker Secty of War.” Includes a three-page handwritten excerpt from the letter, with later pencil inscription reading “July 19, 1861″ top right of first page. Includes a typed transcription of the Walker letter, does not include an envelope. Letter: 9 3/4″ H x 7 3/4” W.

5th item: Civil War era ALS. One page handwritten bifolium letter from Stephen Russell Mallory (1812-1873), Confederate States Secretary of the Navy from March 4, 1861, to May 2, 1865, Richmond, VA, addressed to Judah Philip Benjamin (1811-1884), as 3rd Confederate States Secretary of State from March 18, 1862, to May 10, 1865, no location, likely also in Richmond, VA, dated May 26, 1863. The brief letter, written on CSA Navy Department stationary, reads “Sir I have the honor to acknowledge the receipt of your letter of the 25th instant, together with copies of the “Mechanics Magazine” and “Enquirer”, and for which you will be pleased to accept my thanks. The papers contain information of value to the Department. I am respectfully, Your obt. servt. S R Mallory Secretary of the Navy.” Includes a typed transcription, does not include an envelope. Letter: 10″ H x 7 7/8″ W.

6th item: Pre Civil War era ALS. One double-sided page handwritten bifolium letter from Christopher Gustavus Memminger (1803-1888), 1st Confederate States Secretary of the Treasury from February 25, 1861, to July 18, 1864, Executive Office, Treasury Department, no location, addressed to Byrd Douglas, likely the grandfather of Judge Byrd Douglas (1894-1965), Nashville, TN, dated January 21, 1861. Written prior to the formation of the CSA and the succession of Tennessee from the Union, the letter reads “Sir I am directed by his Excellency the Governor to acknowledge receipt of the One Thousand Dollars enclosed in your letter of the 17th inst. The cordial sympathy with our people which you express, adds greatly to the value of the donation, and I am instructed by His Excellency to convey to you his high appreciation of your generous patriotism. The warm interest you evince in our common cause gives cheering assurance that no long time will elapse before every true hearted son of the South will hold the same elevated and patriotic sentiments which you have so nobly displayed; and that Tennessee, Kentucky and Virginia will come up to vindicate that common cause. Allow me also to extend the same grateful acknowledgment to your brave and efficient sons whose services Tennessee may well be proud to claim in her hour of need, and whom we honor not the less that we at present do not avail ourselves of their generous offer. To such loyal hearts and strong arms the South may fearlessly confide her defence[sic], and by such disinterested patriotism and generosity will the cause of truth and freedom triump[sic] with assurances of high consideration and respect, Your Obt Servt C G Memminger. Ink inscription, en verso. Includes a typed transcription, does not include an envelope. Letter: 9 7/8″ H x 8” W.

7th item: Civil War era ALS. One page handwritten bifolium letter from Alexander Hamilton Stephens (1812-1883), vice president of the Confederate States from 1861 to 1865, Crawfordville, GA, to Joseph Emerson Brown (1821-1894), 42nd Governor of Georgia from 1857 to 1865, no location, likely Atlanta, GA, dated June 21, 1861. The letter reads “Dear Sir–When in Warrenton day before yesterday a gentleman from Augusta told me that some public arms of the State had been left in his possession. I requested him to give me a statement of facts in writing. This has been done in the enclosed letter. I now send it to you that you may take measures to get them. Any arms will be needed. Yours truly Alexander H. Stephens” with possible later ink inscription “Hon AH Stephens July 24 1861” top left. One page handwritten letter from Austin Mullarky, proprietor of the Globe Hotel Augusta, GA, to Stephens, dated June 20, 1861, stating that muskets, swords, and other weapons had been left with him by Captain Robert Ligon McWhorter (1819-1908), 3rd Georgia Volunteer Infantry Regiment, Company C (“Dawson Grays”), en verso of Stephen’s letter to Brown. Includes a typed transcription of Stephen’s letter to Brown with a summary of Mullarky’s letter to Stephens, does not include an envelope. Letter: 10″ H x 8″ W.

8th item: ALS. One page handwritten letter from Robert Tyler (1816-1877), Confederate Register of the Treasury from 1861 to 1865, Richmond, VA, addressed to the CSA Treasury Department, Register’s Office, dated October 26, 1861. The letter, written in regard to the bank notes that were soon to be issued by the Mechanics Banks of Augusta, GA on behalf of the CSA, reads “It is hereby Certified that the Confederate States of America are indebted unto the Mechanics Banks, Augusta, Geo or assigns on the sum of One Hundred Thousand Dollars, payable on demand in Treasury Note, with interest from the 21st day of October 1861…to the day of redemption, at the rate of five per cent annum. Ro Tyler Register of the Treasury of CSA.” Additional inscription stating that one hundred thousand dollars had been received from the CSA Treasury, signed by Charles A. Rowland for the Mechanics Banks, dated February 26, 1862. Does not include an envelope or a transcription. Letter: 12 1/2″ H x 8″ W. 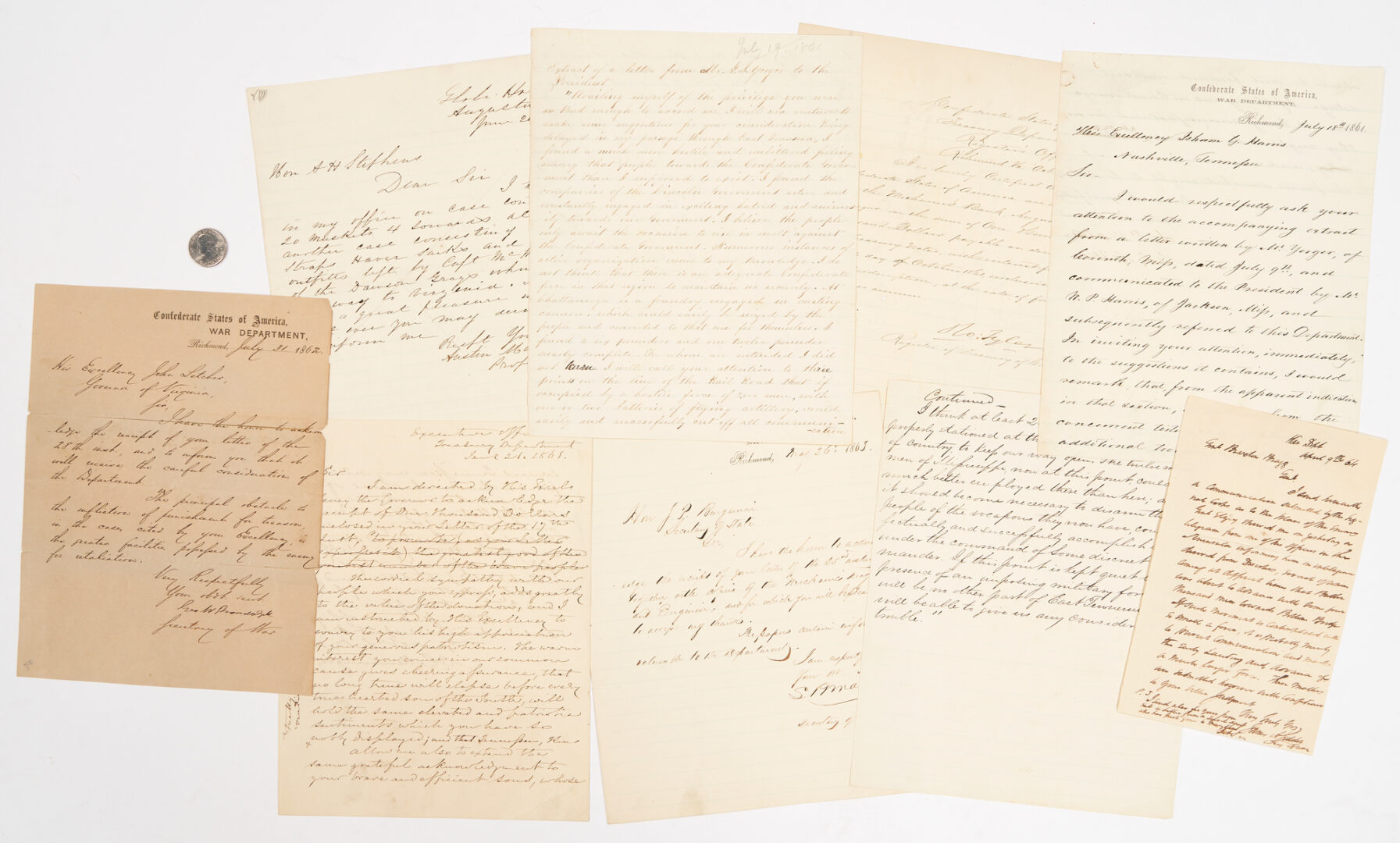 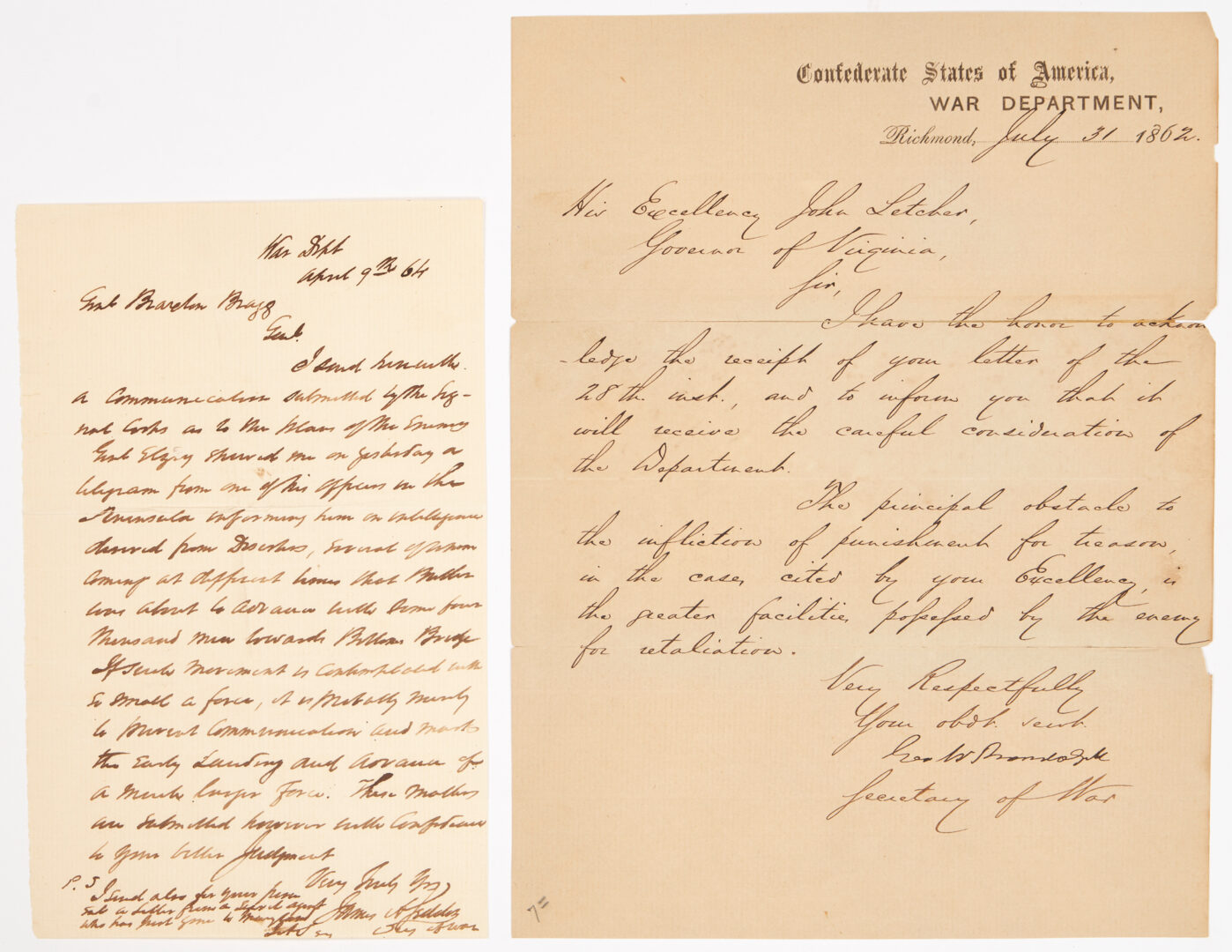 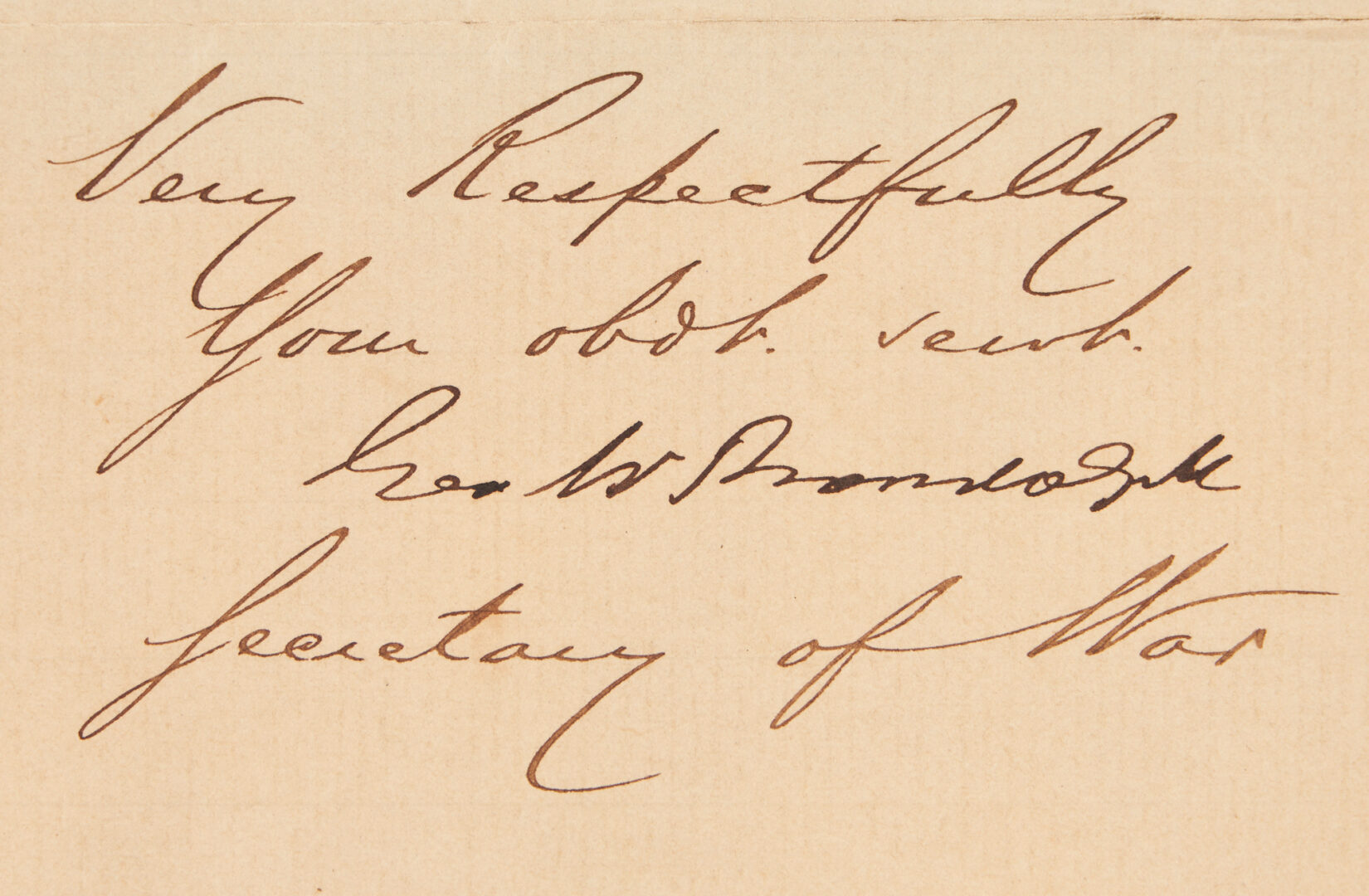 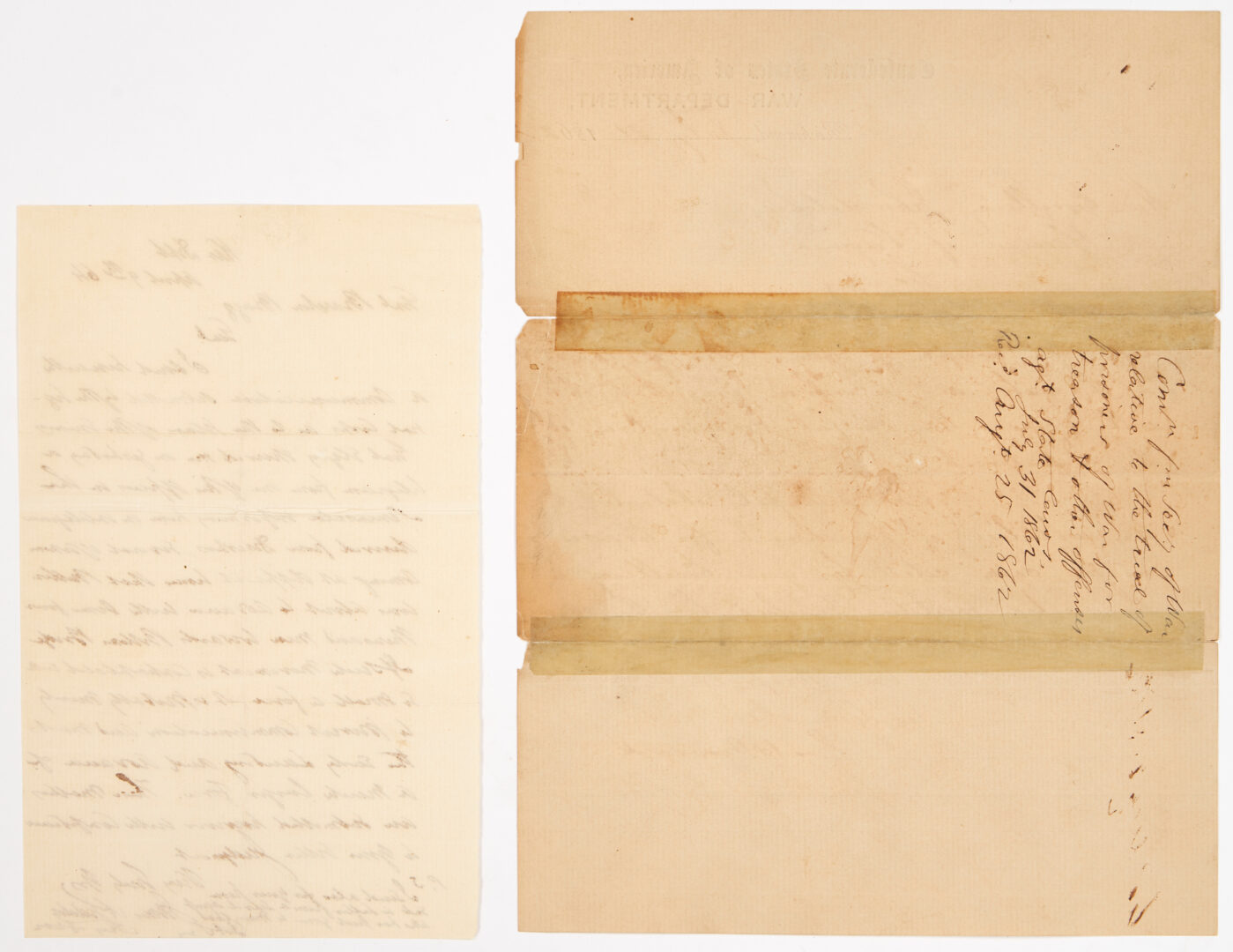 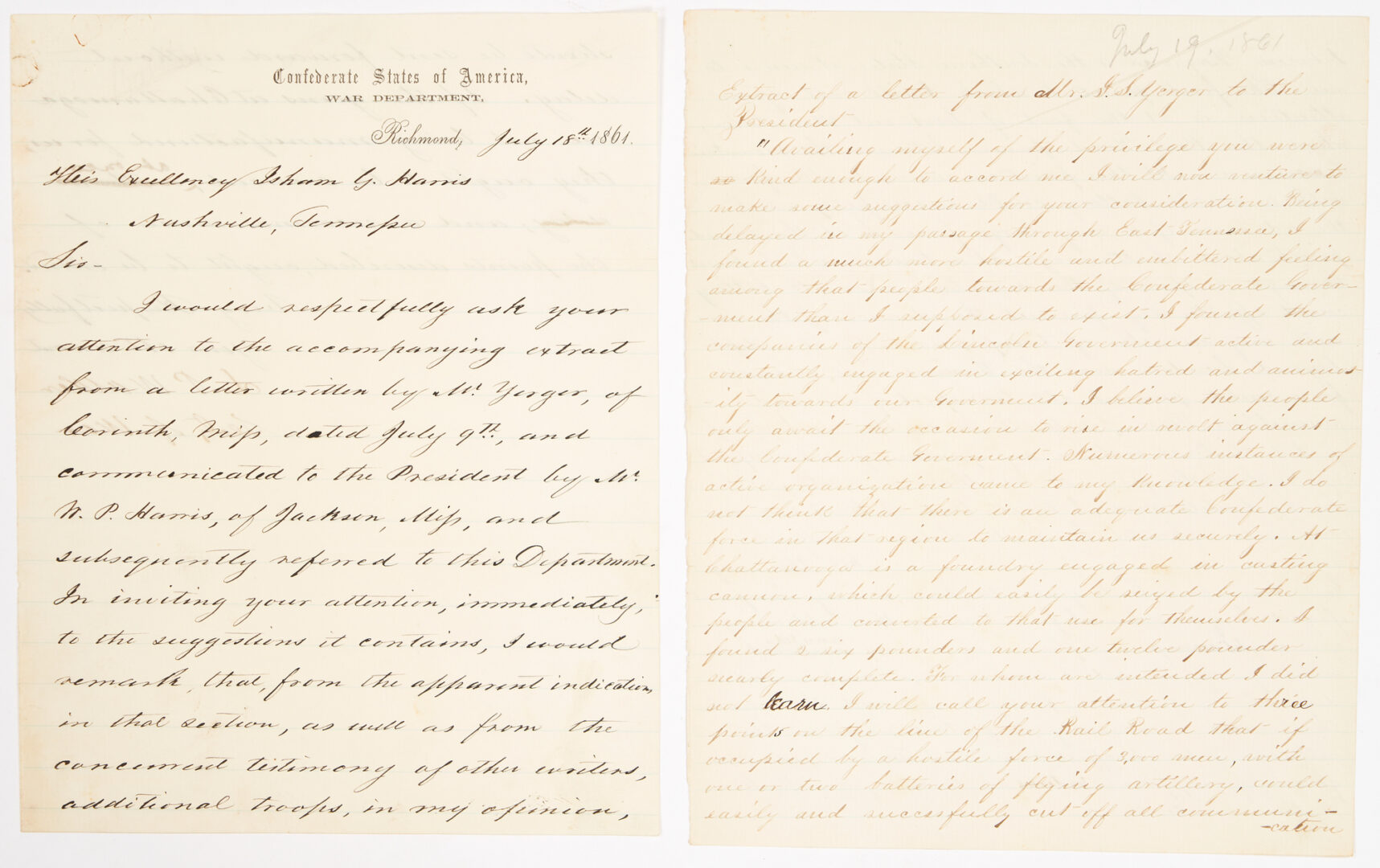 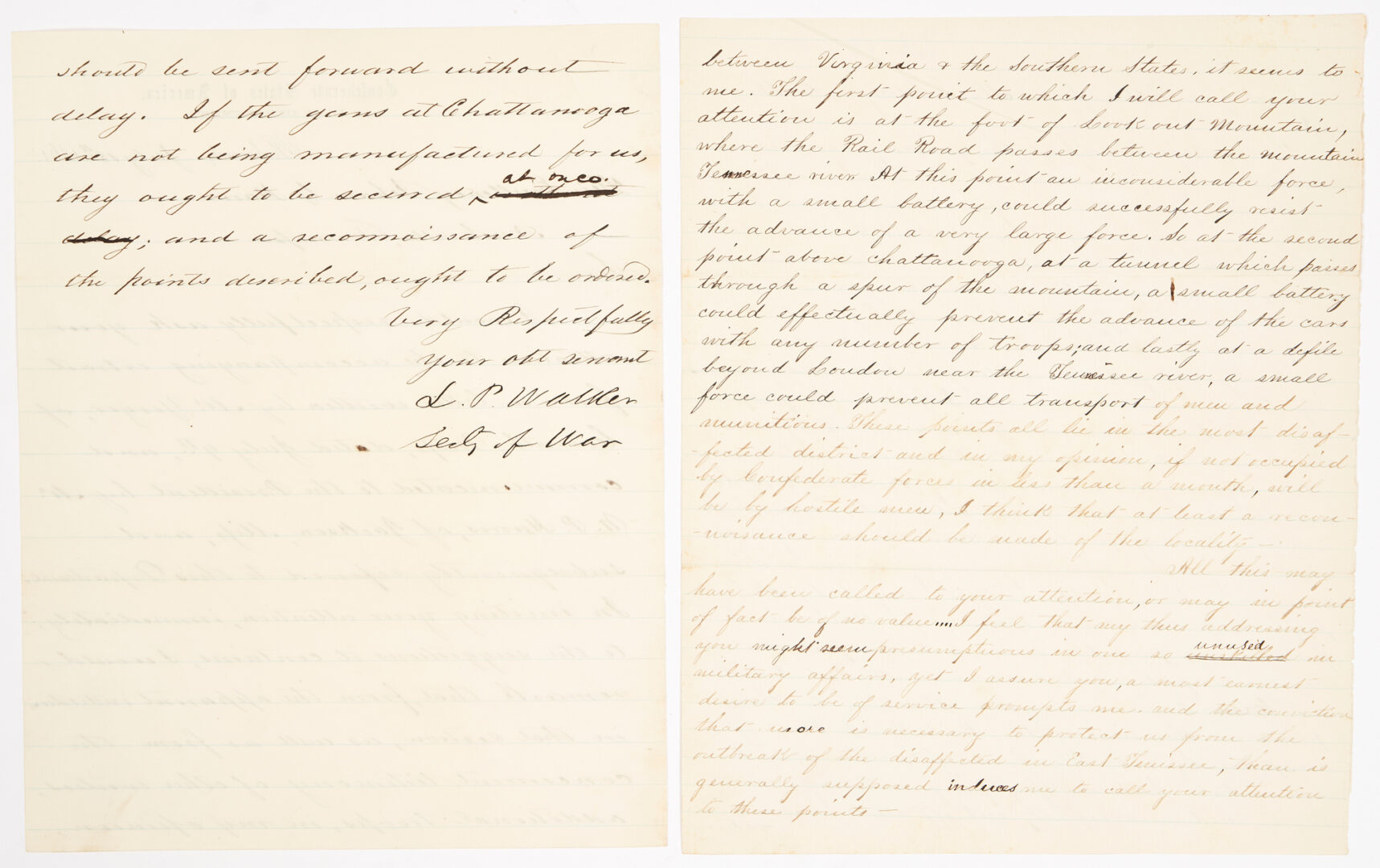 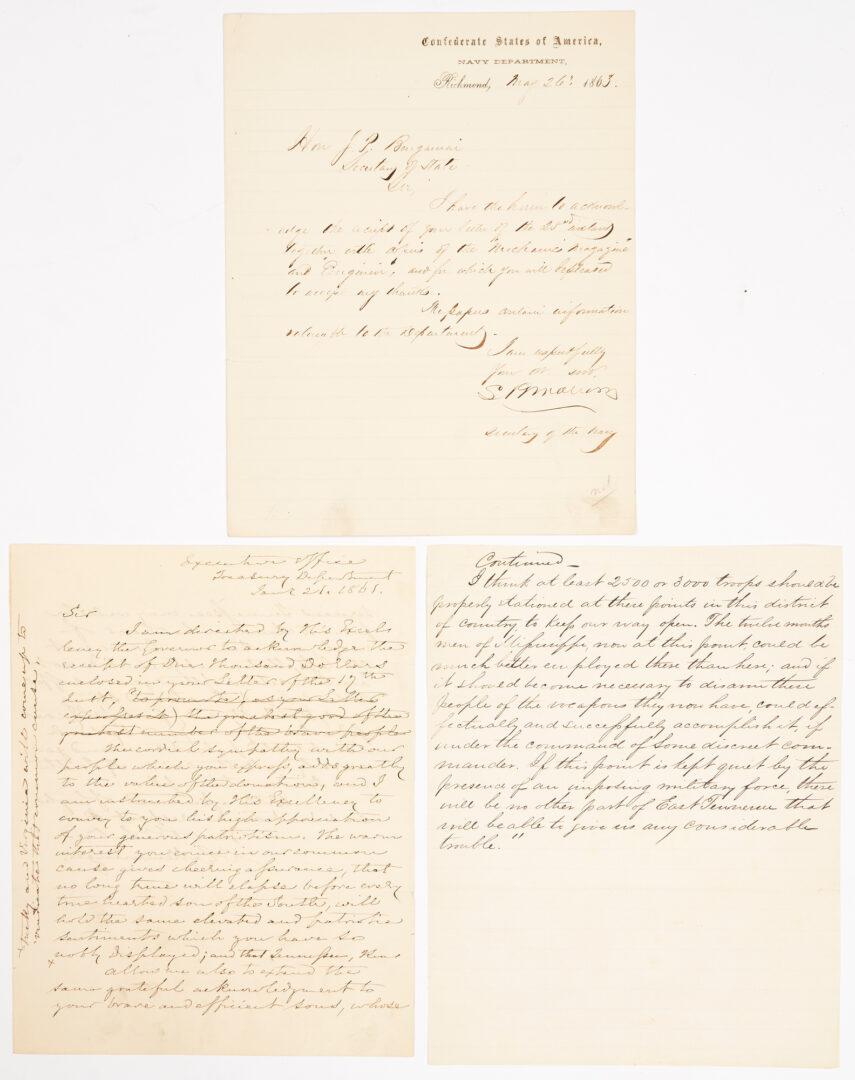 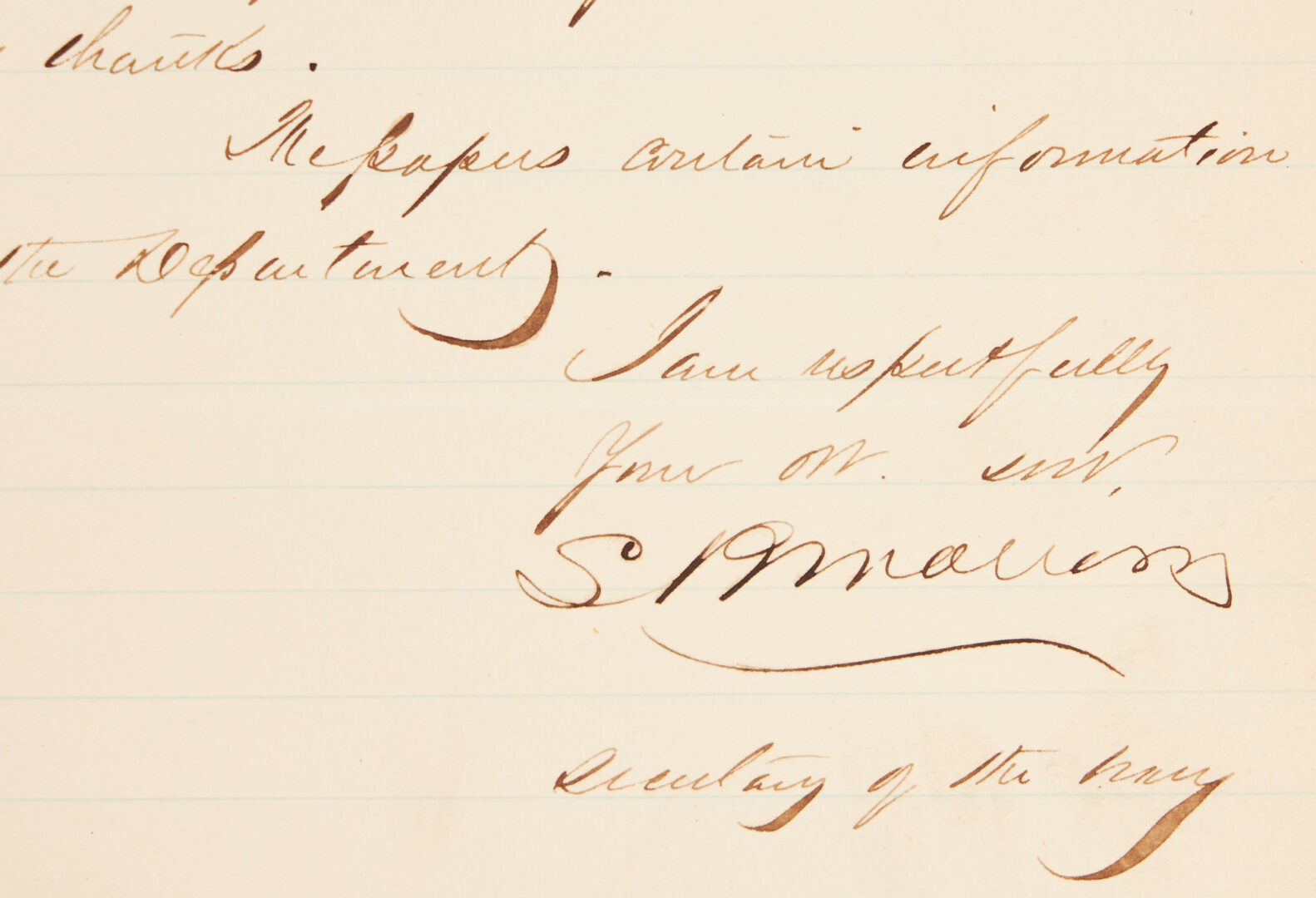 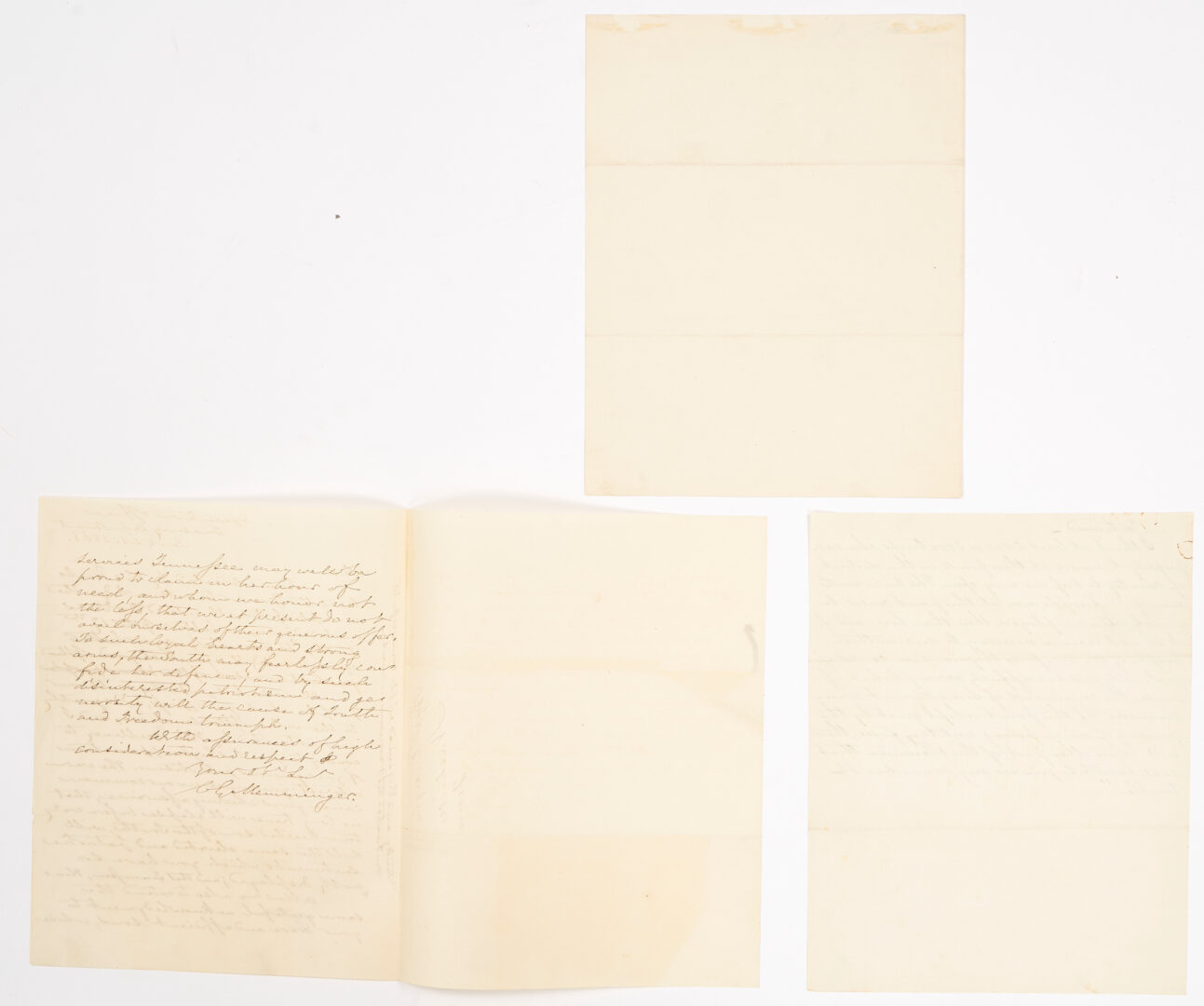 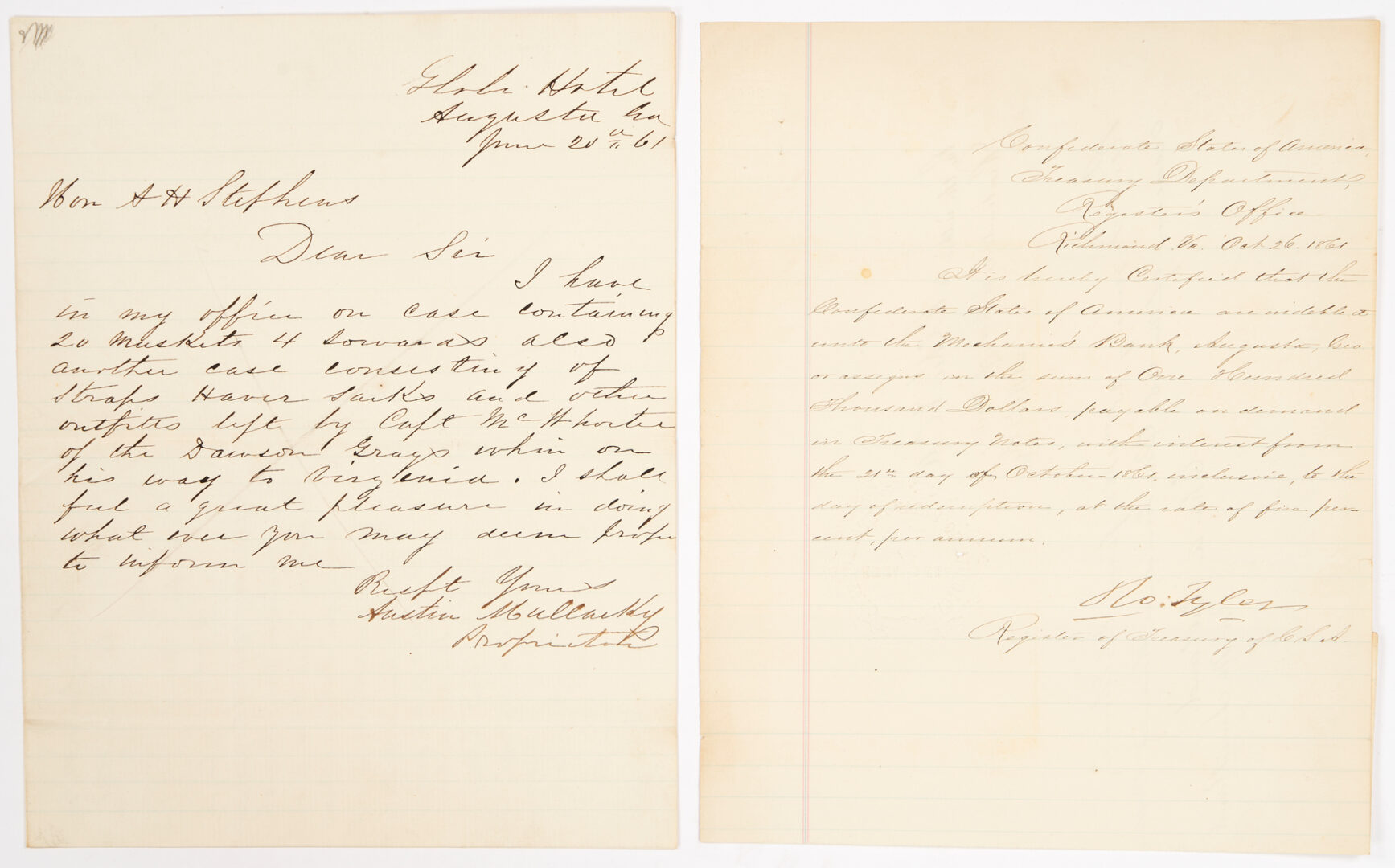 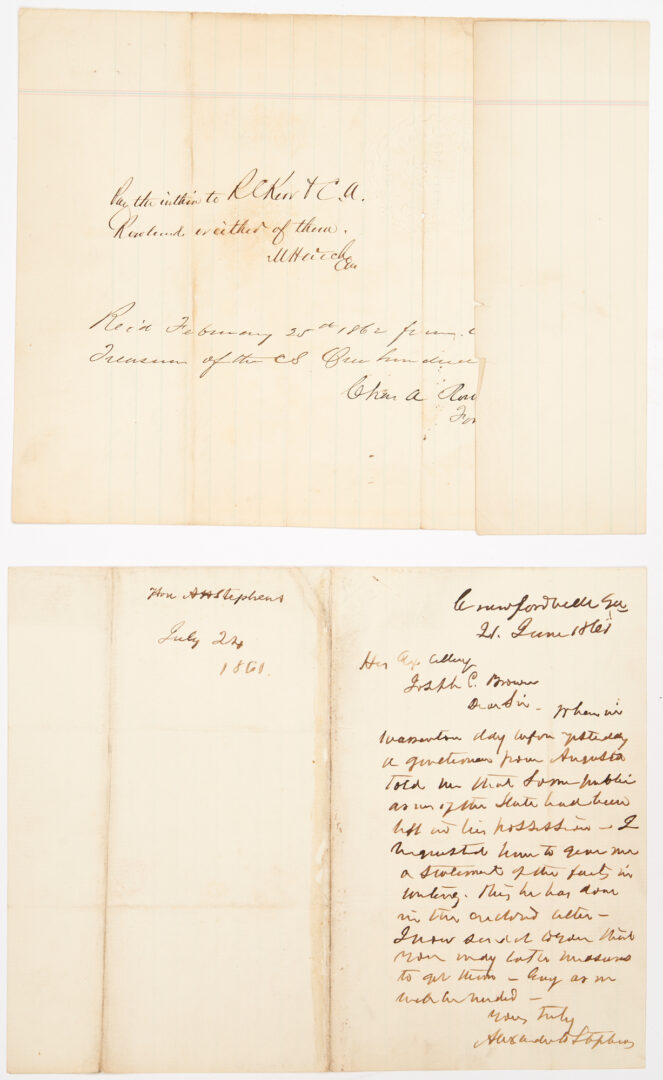 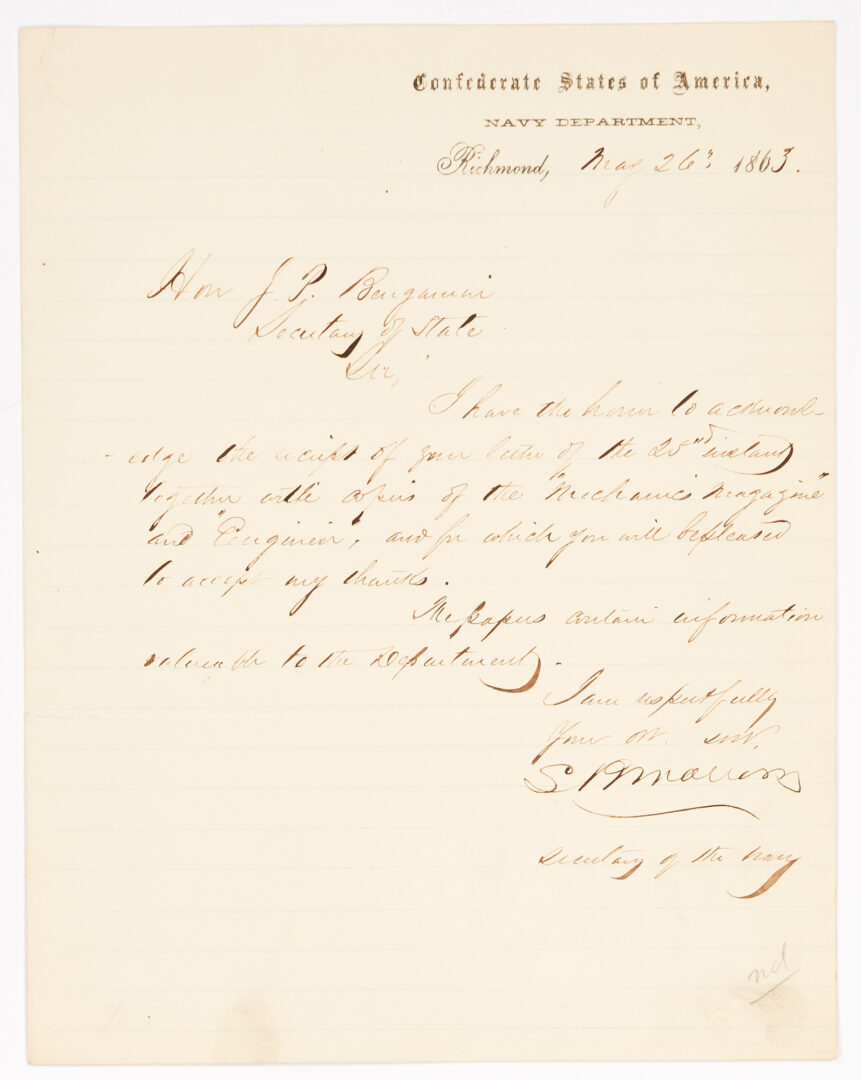