ALS. President Andrew Jackson (1767-1845, 7th president of the United States from 1829 to 1837) one-page handwritten bifolium letter, addressed to Major Andrew Jackson Donelson (1799-1871), near Nashville, Tennessee, containing condolences on the death of Donelson’s wife, Emily Tennessee Donelson. The letter, mostly filled with condolences for Donelson in regard to someone who had recently died, reads, “My dear Major, Your heart rending letter of the 23rd Decber[sic] is just recd–still it is a consolation to me to know that after your unfortunate detention, that you reached home to pay the last tribute of respects to her [mones or monis]–You must summon up all your fortitude on this trying and melancholy occasion–Ki[s]s the dear little children for me & give my kind regards to Mrs. [Emily] Donelson with my heartfelt condolence to her & to you & all the connection on this sad bereavement your affectionatly[sic] Andrew Jackson” with a post script reading “Major A. J. Donelson–P.S. I will write you soon & ask what I shall do with Dear [Eanelys or Zanelys] & your things here–I have the pictures carefully boxed with nunl[sic] A.J.” Address panel wirtten by Jackson with red ink Nashville, TN postmark stamp dated Jan 2 and traces of a wax seal, en verso. Housed under double-sided glass in a giltwood frame. Letter: 10″ H x 16″ W. Framed: 10″ H x 8 1/2″ W. Note: Andrew Jackson Donelson was the nephew and private secretary to Andrew Jackson after he won the 1828 presidential election. His wife Emily Donelson (1807-1836) was the niece of Rachel Donelson Jackson, Jackson’s wife, and served as White House hostess and first lady of the United States until the events of the Petticoat Affair in the early 1840’s put a strain on her relationship with Jackson. Emily Donelson died of tuberculosis on Dec. 19, 1836. This letter is dated January 2, 1836, but it is believed Andrew Jackson actually penned it on January 2, 1837, and mistakenly wrote the wrong year. The “Mrs. Donelson” mentioned later is probably Emily’s mother, Mary Purnell Donelson, who was likely living with her daughter since Emily was ill and Mary’s husband John had died in 1830. 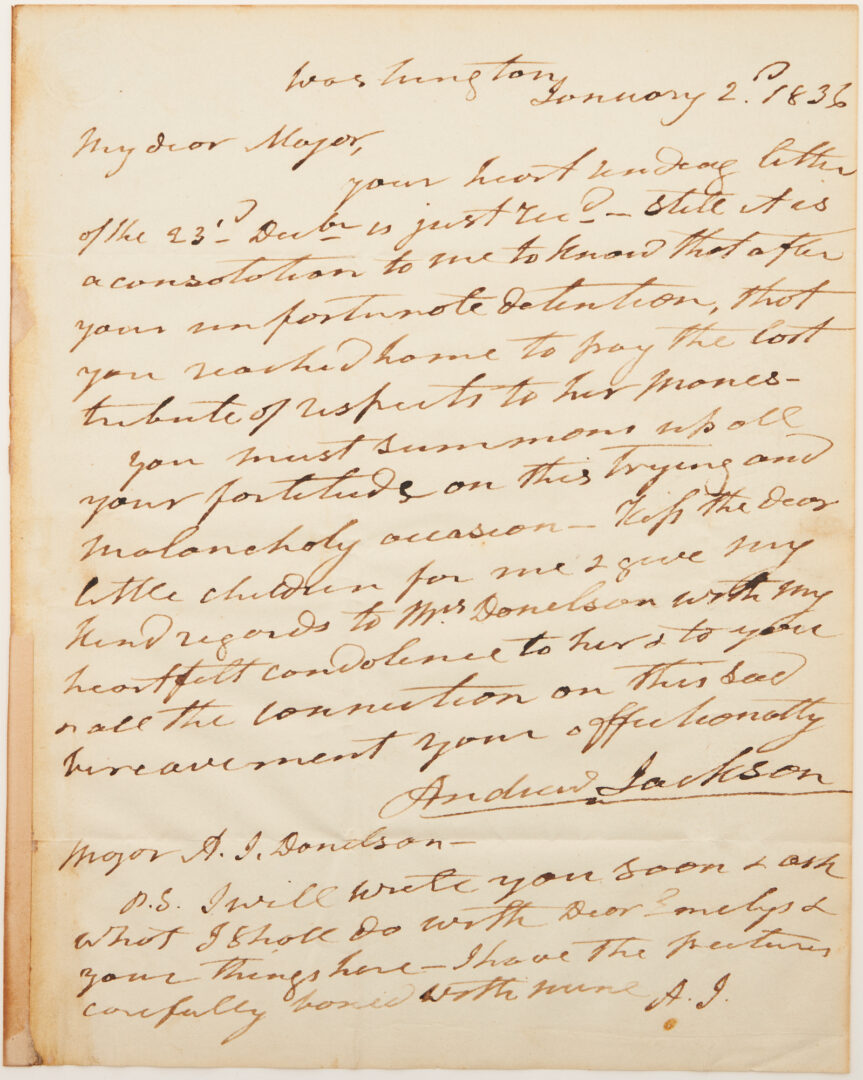 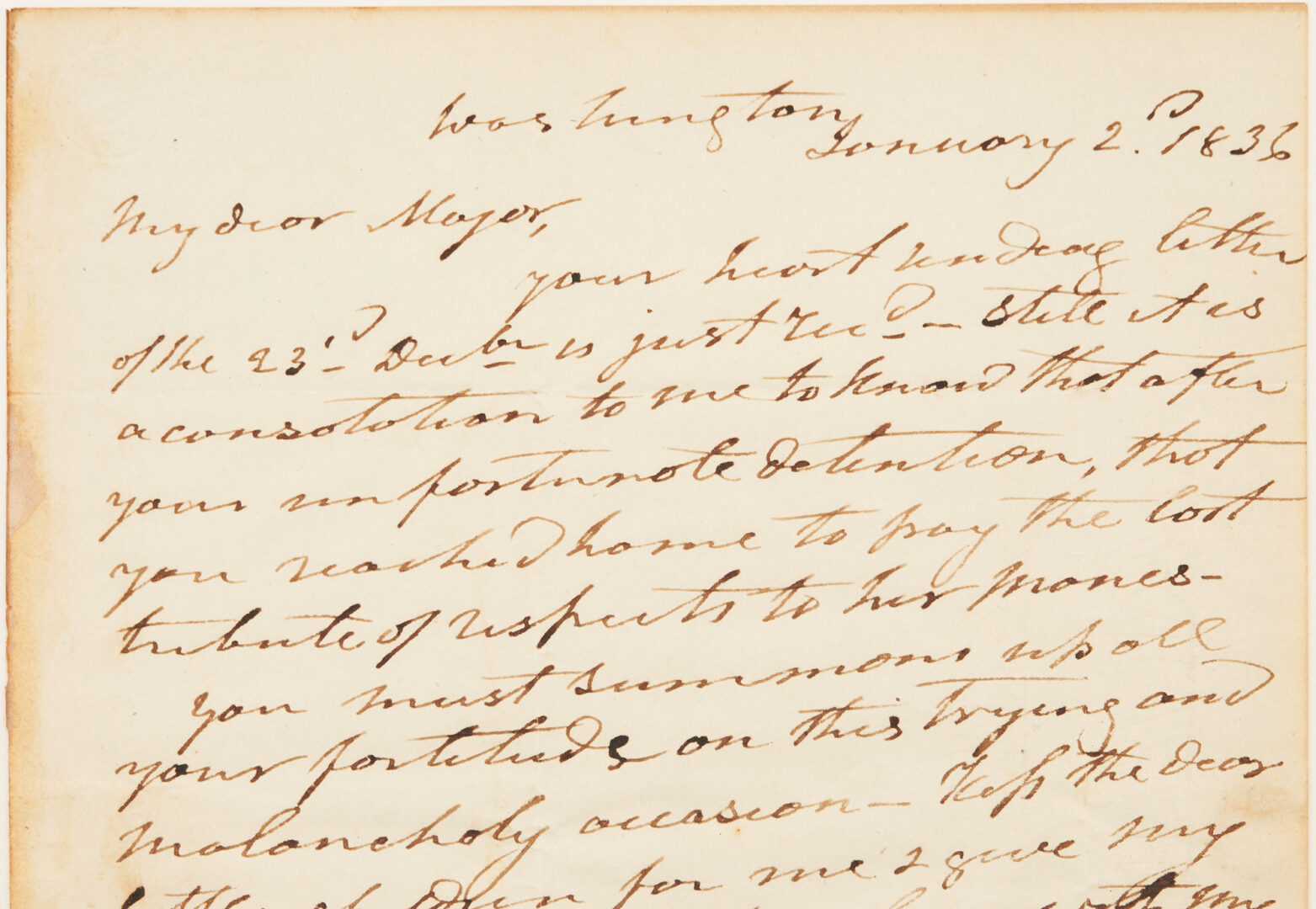 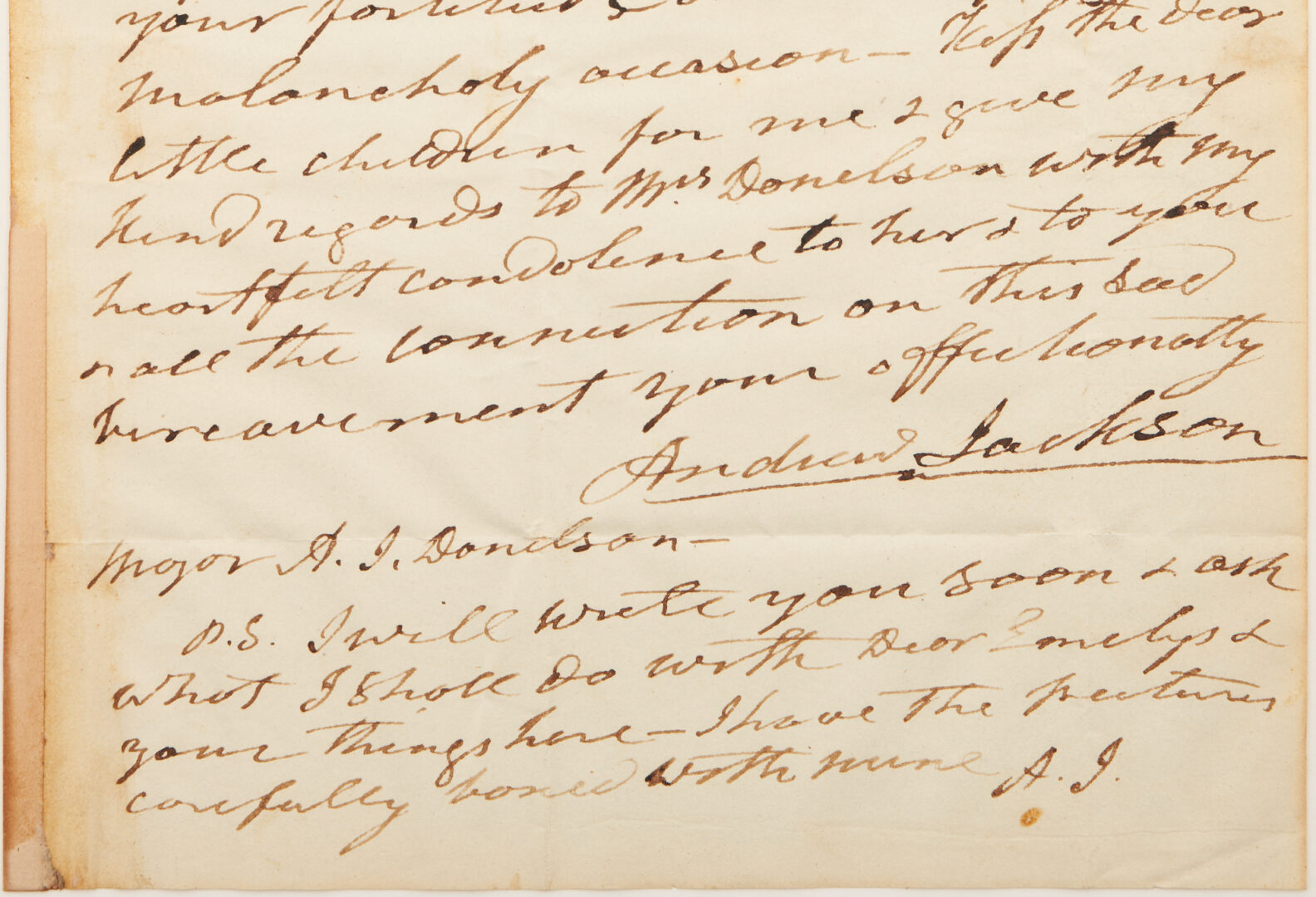 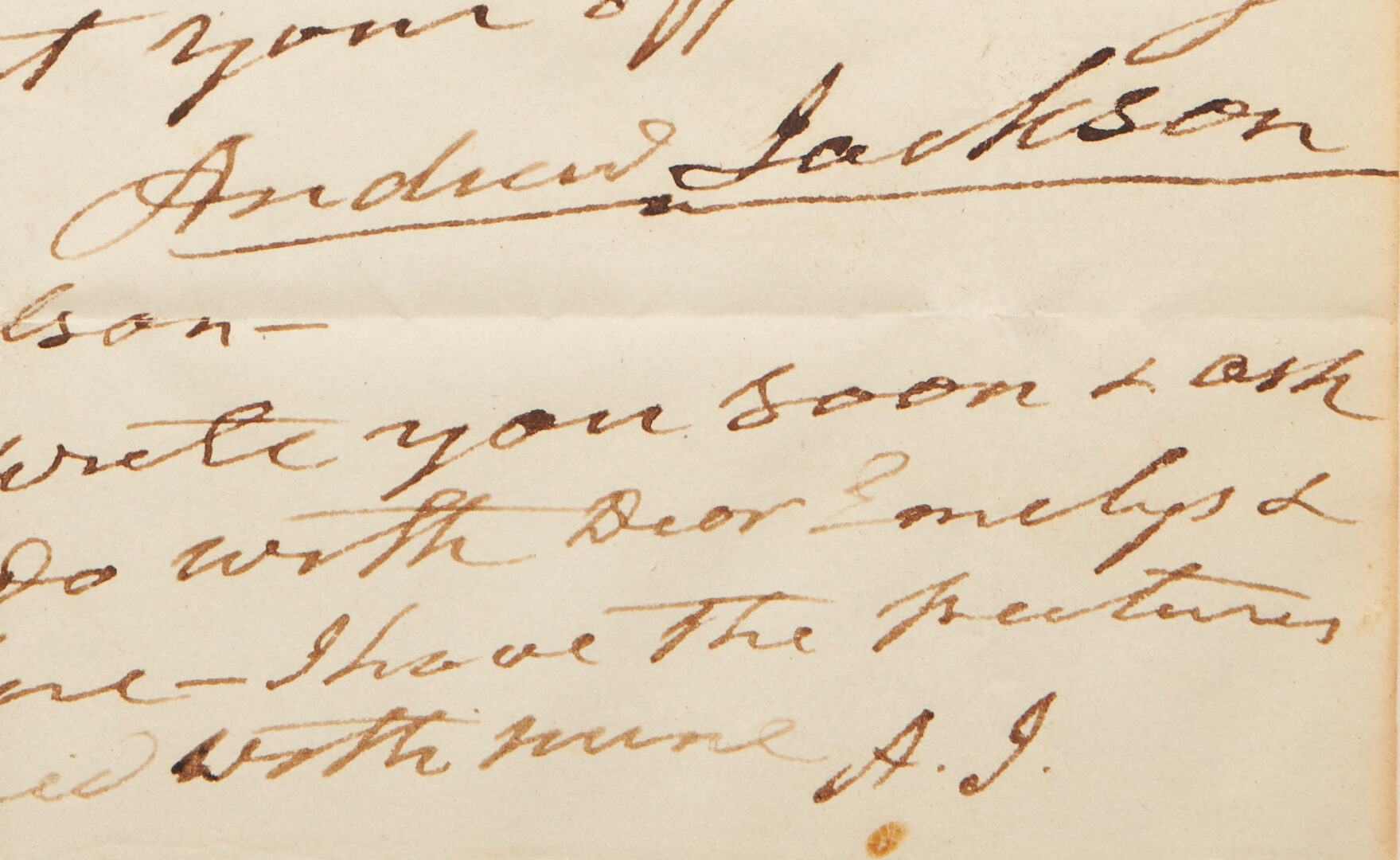 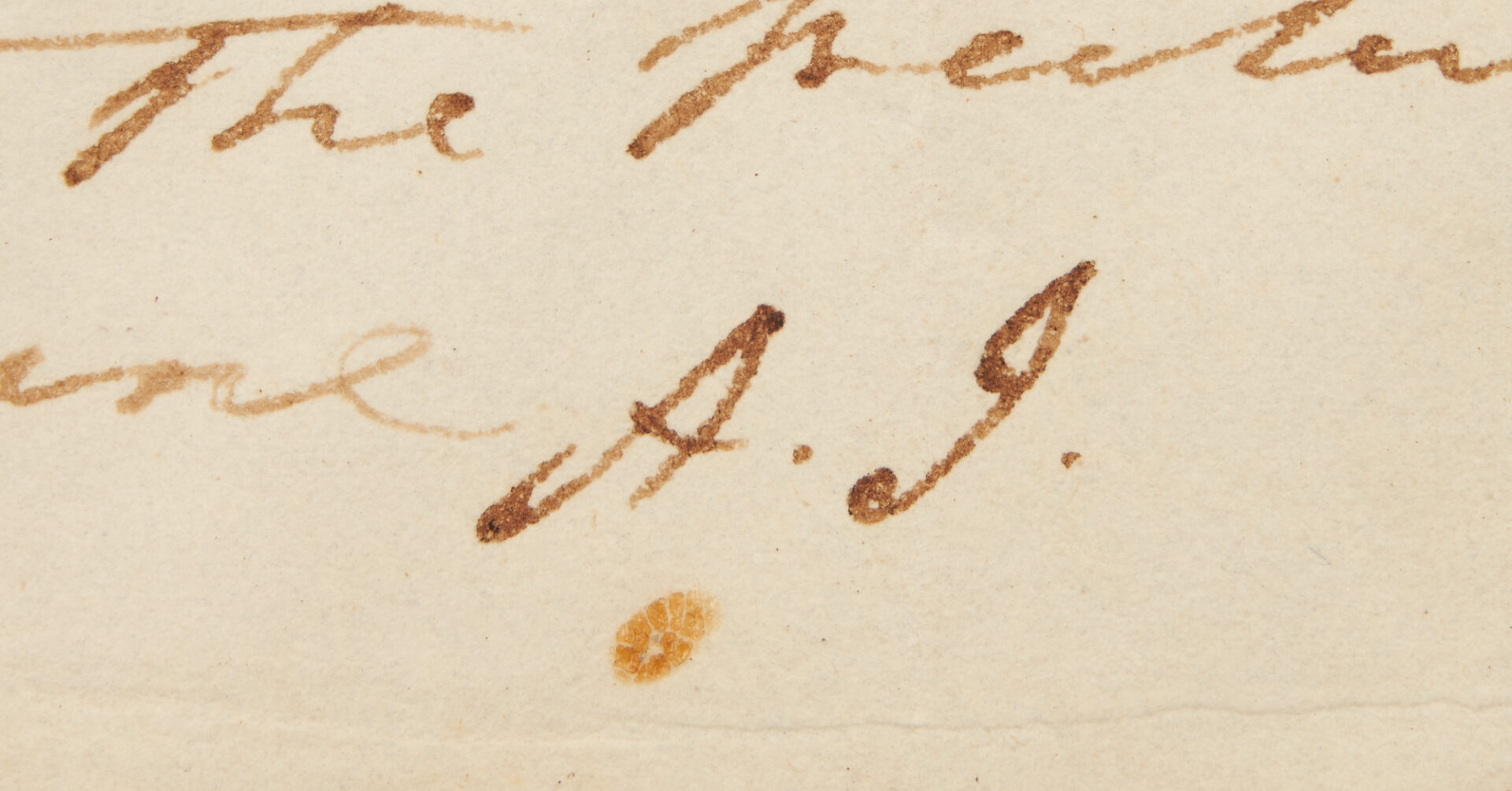 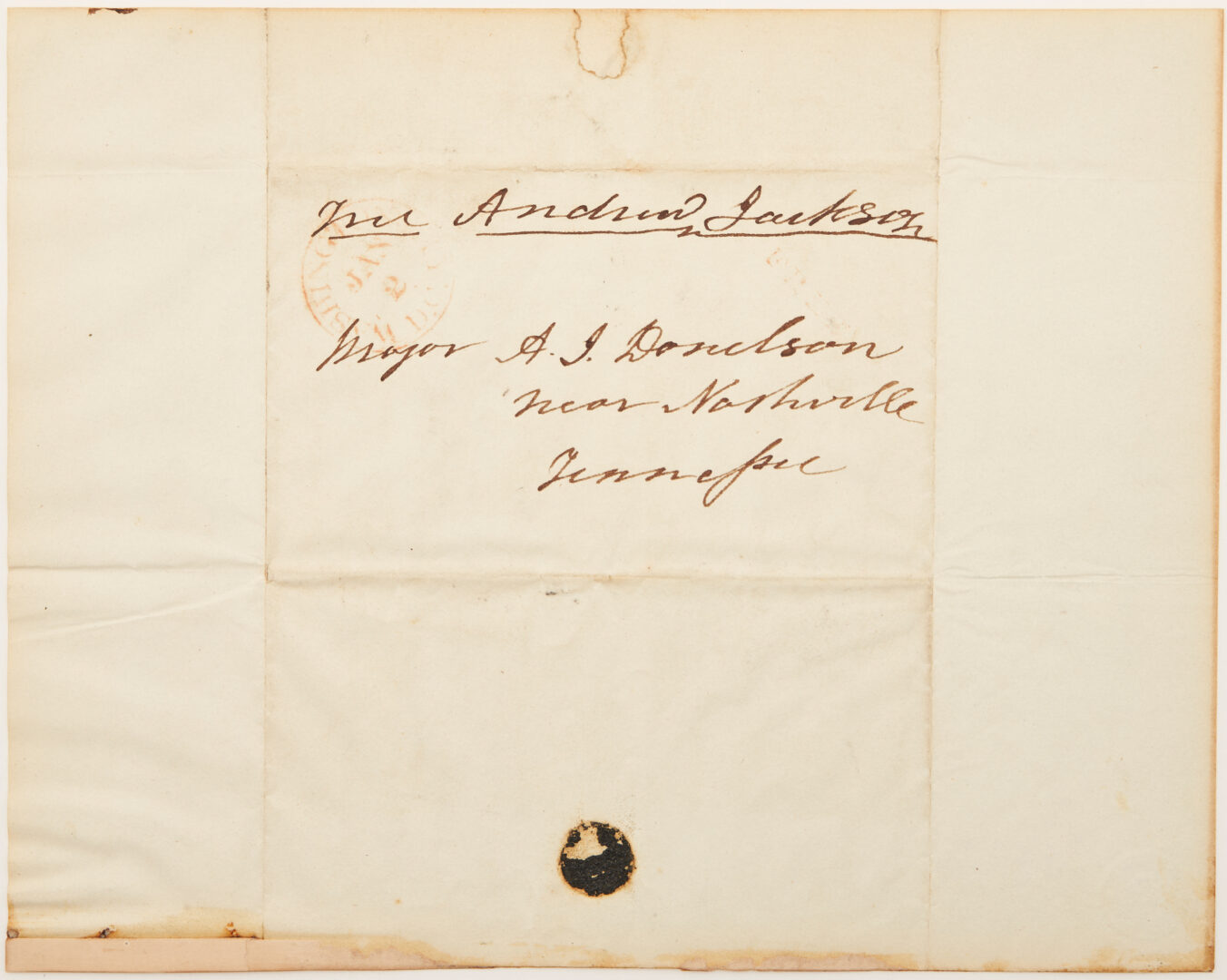 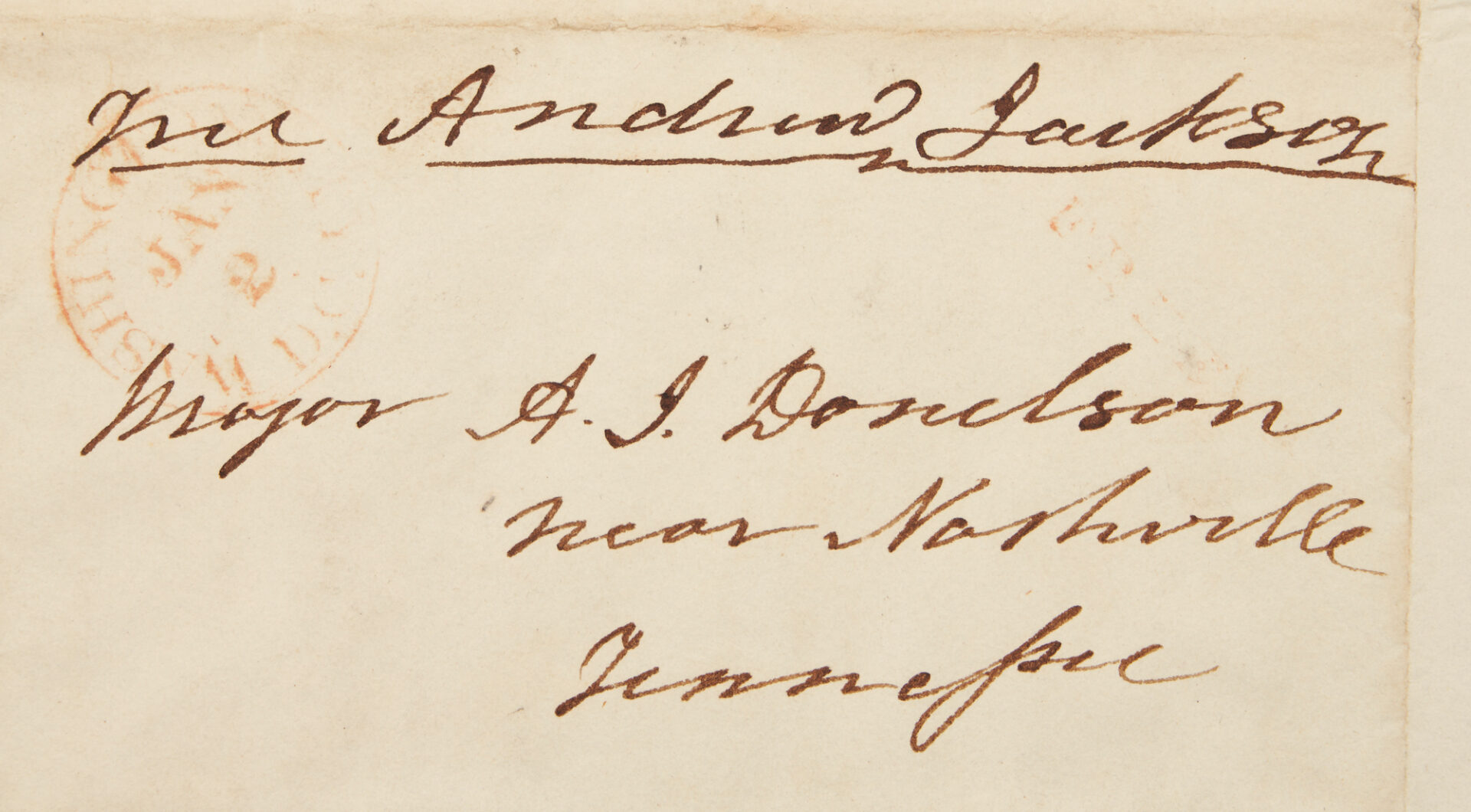